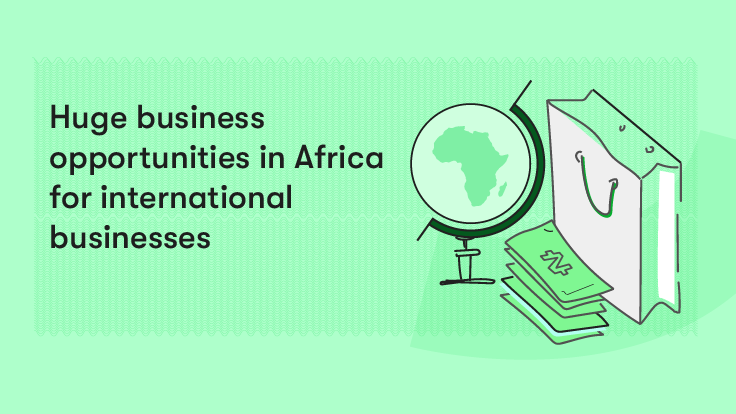 Over the years, Africa has emerged as an attractive market with high economic potential, mainly due to its favourable climate for agriculture, natural resources, and a young, vibrant population. It is a good fit for export-oriented companies worldwide due to the high demand for consumer goods. The continent is unquestionably a hotspot for investors.

Technological advancements, including access to the internet in many African countries, have contributed significantly to Africa’s consumer spending as the purchasing power increases simultaneously with mobile phone and internet penetration. This growth has also made Africa one of the fastest-growing mobile telecom markets in the world.

In 2017, Africa’s consumer e-commerce market was valued at $5.7 billion, and these revenues has continued to extend with the number of internet users across Africa.

There’s an enormous potential for future growth in Africa’s consumer markets due to the increasing demand for goods and services. International businesses are already breaking into the African markets because there is a high demand for consumer goods from millennials. From burger king to Uber to Amazon, more businesses are taking advantage of the growing opportunities in Africa.

By 2030, the most important consumer markets will include Nigeria, Egypt, and South Africa. There will also be huge markets in Algeria, Angola, Ethiopia, Ghana, Kenya, Morocco, Sudan, Tunisia, and Tanzania, among other African countries.

Given the promise of a financially stable and prosperous future that Africa’s consumer market potential holds, there’s no better time for more businesses to come in than now.

If you are targeting the African buyers in emerging African markets, here are five (5) major items that Africans regularly imports;

The fashion industry provides another booming opportunity for international businesses as it is arguably the most bought goods by Africans. Imported items in this category have gained wide popularity as millennials love purchasing items from big-name brands. There’s also a market for second-hand products. Countries like China are already providing cheaper clothing options for low-income earners, which also serves as a source of income for others. It is reported that the US is also the largest used clothing exporter globally, selling almost $700 million annually.

Another market with huge opportunity is in the sales of electronic devices like computers and other electronic products. There’s a high demand for these products since Africa has become one of the largest hubs for technological innovations. As a result, more manufacturers are concentrating their efforts on producing these products in large quantities to target the ever-growing African markets specifically. South Africa’s computer market, for instance, is reportedly valued at more than $1 billion.

In Q3 of 2020, 3 million units were shipped into the country. Nigeria has over 200 million people, and there is a thriving market for mobile phones. This is one innovation that has cut across the socio-economic divide, gaining popularity among the high-class and the low-class.

The rise of mobile money platforms has also made a significant contribution to the growth of these markets by offering services that can easily be accessed from a smartphone by everyone.

Africa is also a major importer of most agricultural products, even with its vast array of lands and favourable climate for agriculture. This is largely due to its ever-growing population, poor infrastructure, and inadequate agricultural industries.

Nigeria and South Africa account for almost half of the imports made into the continent. This has shown to be a huger business opportunity for international businesses. With the middle-class economy expected to continue growing, the African food export market is sure to still grow.

Africa accounts for the highest number of global imports of used cars. The high-class typically buys brand new cars shipped from overseas but the low and middle-income earners purchase used cars.  From a report, Between 2015 and 2018, around 80% of the 14 million used cars exported from the European Union (EU), Japan, and the US, went to low and middle-income countries. This trend has shown that the automobile industry is a highly lucrative opportunity in a rapidly growing continent as more people can now afford vehicles both for commercial and personal purposes

Reaching the right African buyers can be quite challenging for most international companies but notwithstanding, some multinational fast-moving consumer goods companies have managed to penetrate the African markets. African consumers are young and urban and are ever ready to spend. They reward brands that they trust and these brands can thrive in the market for decades.

According to a report by McKinsey, companies that win in Africa are those that heed the following four imperatives.‘

International businesses that intend to penetrate the African market can also partner with Klasha to make transactions easily accessible to people since a large number of the population mostly shop online. Klasha gives merchants worldwide the ability to sell online to Africa and receive payments in local African currencies while enjoying super fast last-mile delivery within 5-9 days to consumers across the continent.

International businesses can leverage the products built by Klasha to access the ever-growing African market. Click here to start selling seamlessly to Africa and accepting payments in African currencies.

Sign up & one of the Klashans will be in touch